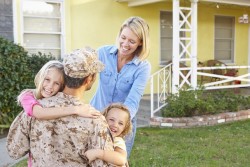 Every year, the President of the United States signs a proclamation declaring November Military Family Month. This annual proclamation marks the beginning of a month-long celebration of the Military Family, honoring the commitment and sacrifices made by the families of the nation’s service members.

The Myers Family is one of those military families who have made that commitment to serve and protect the country.

Murrel “Sonny” Myers served in the military during the Vietnam War, and comes from a long line of veterans.

“My father served in WWII. He was on a destroyer escort and was involved in bringing up German U-boats in Long Island Sound.”

When Sonny came of age, the Vietnam War was going on, and he knew he’d likely be drafted. He followed in his father’s footsteps and joined the U.S. Navy in 1968 at the age of 19. “I got orders to go to USS Forrestal in Palma de Mallorca, Spain. I got to go Cannes, Nice, Naples, Genoa, Athens, Istanbul, Corfu and Cuba.”

When Sonny’s eldest son turned 18, he too decided to join the Navy. This time, it was during Desert Storm.

“He saw the military as an opportunity to go and experience something and also get money for [an] education. I felt very proud of him for that,” Sonny says. 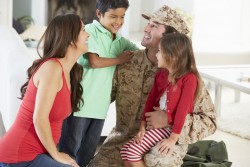 While Military Family Month is a great time for everyone to support those who serve and their families, Sonny feels veterans share a special bond with those currently serving.

“I think it’s very important that veterans support those who are serving and have their back. It’s one thing for someone to say thank you for your service, but it’s a whole other ballgame coming from someone who actually did serve. There’s a camaraderie even though we’re from different generations.

The families of those who serve play a vital supporting role, and also make many sacrifices of their own.

Support military families near and far during November and all year-round.

Learn more about military families with the resource links below.